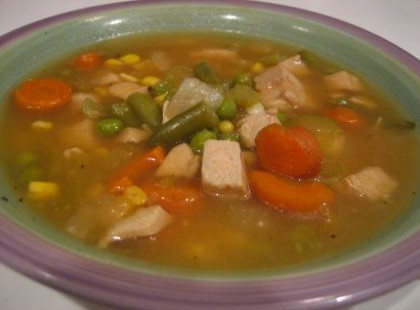 In the July issue of the Journal of Nutrition a study was published that tested the difference between consuming the same meal in a solid form (Chicken and Vegetables with a glass of water) vs the same exact meal blended into a soup. Same amount of calories, same nutrient profiles, everything the same, except the way they are served.

In this study they monitored both how well each meal reduced hunger and how quickly each meal was digested. The faster a meal is digested, the sooner you will become hunger. On both counts the soup beat the solid meal by a wide margin.

This is evidence to suggest that foods with high water content make you full faster and keep you full longer. Staying full longer means you will take in fewer calories and be more likely to lose weight.

This leads us to a new rule… Eat More Soup… Once a day if possible.

Separation of solids and liquids within the stomach allows faster gastric emptying of liquids compared with solids, a phenomenon known as sieving. We tested the hypothesis that blending a solid and water meal would abolish sieving, preventing the early rapid decrease in gastric volume and thereby enhancing satiety. We carried out 2 separate studies. Study 1 was a 2-way, crossover, satiety study of 22 healthy volunteers who consumed roasted chicken and vegetables with a glass of water (1008 kJ) or the same blended to a soup. They completed satiety visual analogue scales at intervals for 3 h. Study 2 was a 2-way, crossover, mechanistic study of 18 volunteers who consumed the same meals and underwent an MRI to assess gastric emptying, gallbladder contraction, and small bowel water content (SBWC) at intervals for 3 h. In Study 1, the soup meal was associated with reduced hunger (P = 0.02). In Study 2, the volume of the gastric contents after the soup meal decreased more slowly than after the solid/liquid meal (P = 0.0003). The soup meal caused greater gallbladder contraction (P < 0.04). SBWC showed a biphasic response with an initial “gastric” phase during which SBWC was greater when the solid/liquid meal was consumed (P < 0.001) and a later “small bowel” phase when SBWC was greater when the soup meal was consumed (P < 0.01). Blending the solid/liquid meal to a soup delayed gastric emptying and increased the hormonal response to feeding, which may contribute to enhanced postprandial satiety.