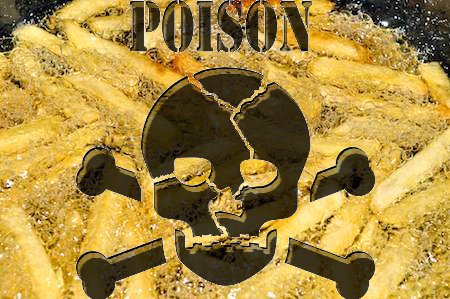 A very important part of the It’s OK to EAT Diet is to avoid Fat as much as possible.

Of course your body does need a very small amount of fat in your diet but you should keep Fat intake to about 8 to 10 percent of total Calories. For reference the Standard American Diet on average is about 35% Fat and in many cases 40% or more Fat!

Fat is the most calorie dense food you can eat, more so than even sugar. Worst of all Fat doesn’t trigger Satiety or Fullness properly. Normally your body tells you when to stop eating based on two things…

The problem is that high fat foods don’t seem to register properly as super high energy density, so your body tells you to eat more calories than it needs to maintain a healthy energy balance. This results in a slow and steady weight gain.

The single best thing you can do to start losing weight right now is to throw away all of your Cooking Oils, Butter, and other high fat foods. Keep an eye on the Calories From Fat number on the Nutritional Facts label and reduce your total Calories From Fat to less than 200 a day.

It takes practice but the more you pay attention to the Fat Content of what you eat the easier it will get.

Now for the study…

This study is from 2011 and it tested the effect of a High Fat diet on 10 male participants. The result was the the High Fat Diet make them hungry sooner, increased their food intake, and on average they gained almost 3 pounds each over 4 weeks.

Clegg ME, Shafat A.

High-fat (HF) diets of 2 weeks have been shown to accelerate gastrointestinal (GI) transit and decrease satiety. However, the effects of HF diets on GI transit over longer periods than 2 weeks are unknown. We hypothesize that over 4 weeks, GI transit of a HF test meal will accelerate. The study was a repeated measures design with 10 male volunteers completing a 1-week HF diet intervention and 7 completing a 4-week HF diet intervention with testing once a week on the same day throughout the 4 weeks. Gastric emptying (GE) was measured using the (13)C-octanoic acid breath test and mouth-to-caecum transit time (MCTT) using the inulin H(2) breath test. Satiety was analysed using visual analogue scales and an ad libitum buffet meal. Body mass increased by 1.3 kg over the 4 weeks (p = 0.036). GE latency time decreased from 45 ± 8 to 41 ± 10 min (p = 0.047) over 1 week but there were no changes in any GE parameters over the 4 weeks. MCTT was accelerated over 1 week (p = 0.036) from 308 ± 43 to 248 ± 83 min. However, over the 4-week period, there was no change. Volunteers became more hungry and desire to eat became greater after 1 week (p = 0.01). Changes in satiety were also evident over the 4 weeks. Satiety was reduced in the primary weeks and then returned to baseline towards the end of the intervention. GI adaptation to a HF diet occurred over a 1-week period and returned to pre-diet levels at the end of 4 weeks.